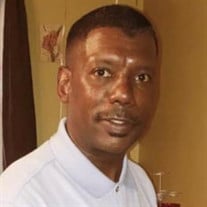 JAMES WALTER MILES III, the son of Rita Lorraine and James Walter Miles, Jr. (and affectionately known as “Junie Miles” and “Hawk Head” because of his hair peak), was born on November 12, 1958, in Baltimore, Maryland. He departed this earthly life on May 2, 2022. Junie received his education through the Baltimore City Public School System, graduating from Edmondson High School in 1977 and attending Morgan University where he sang on the choir. He then married Yarlene Johnson and from that union were three daughters, Nicole, Taneka, and Nakia Miles. He enlisted in the United States Army in 1978. Upon completing a tour in Korea and receiving numerous commendations and awards, Junie was honorably discharged after 9 years of military service in 1987. Reentering civilian life, Junie was a jack-of-all trades mastering them all. Whatever he set out to do he accomplished, and he gave every task his all. His work experience spanned from heating and air conditioning specialist, plumber, carpenter, administrative and leadership roles to engineer. He started Miles Home Repair Service in 2002. Junie believed he should be the best at whatever he decided to do, and this perfection and pride showed up at its finest in his love for photography. He was a self-taught photographer who confidently perfected his profession gaining him photography rights among celebrities and politicians. His family and friends will never forget posing for what seemed like at least a thousand shots until he decided he had the perfect picture; and the picture was always perfect! Junie lived, laughed, and loved to the fullest and his presence filled the lives of his family and friends with laughter and humor. He will be fondly remembered as upbeat, positive, fun loving and outgoing. Junie saw the good in everyone and had a gift of finding light in the darkest situations. You never heard him complain; and his remedy for your bad day was to share an encouraging quote to fit your circumstance. Junie’s unconditional love, support and powerful presence will be profoundly missed by his family and friends. Junie was preceded in death by his father, the late James Walter Miles, Jr. He leaves to cherish his memory: his loving mother, Rita Lorraine Miles; four loving daughters, Nicole Miles, Nakia Miles, Taneka Miles and Gina Wilson; two granddaughters, Obituary Aniyah Thompson and Reagan Wilson; five grandsons, Edward Knox III, Telly Thompson, Antonio Joyner, Evan Burroughs and Jordan Goppy; one great-grandson, Avian Key; three devoted sisters, Shelia Miles-Gross, Cheryl Pollock and Sabrina Miles Hawkins; two loving nephews, Donnie Barkley and Edward Butler III; three loving nieces, Asia Pollock, India Pollock and Tunisia Pollock; and a host of other uncles, aunts, family and friends.

The family of James W. Miles III created this Life Tributes page to make it easy to share your memories.

Send flowers to the Miles family.