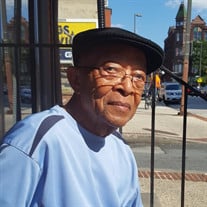 Herman Thomas affectionately known as "Cooley" to family and friends was born on October 6, 1931 in Franklin County, NC to the late Earley Thomas and Mittie Alston Thomas. He departed this life on Friday, October 25, 2019 after a brief illness. Herman was a gifted man of many skills and an abundance of knowledge. He could offer encouragement to the most downtrodden individuals and could discuss politics and life events with the best of them. Herman had a kind heart and a loving sprit and was loved by many. Herman was employed at Best Battery for a number of years as a mechanic. He was self-taught and could repair any vehicle from a Volkswagen to a Bentley. Herman always felt that African Americans should support their own communities and opened Thomas Grocery in 1978. Thomas Grocery was a staple in the Edmondson/Rosemont Community providing fresh fish, produce and famous "penny" candy. Mr. Thomas would allow customers who were unable to pay, carry a tab until they were able to pay. To this day people still remember Mr. Thomas and Thomas Grocery. Herman was joined in marriage to the late Sadie Perry Thomas on February 21, 1951. God blessed this union with eight children. He was preceded in death by one son, Robert McDonald Perry (Marcella); one sister, Bernice Durham, 3 brothers, James, Robert and Leroy Thomas. Those left to cherish his memory are five son, Ronnie Thomas, Herman Lee Thomas (Terri), Ricky Edward Thomas, Michael Ray Thomas, and Barry Lind Thomas; three daughters, Blondie Marie Bryant, Janice Thomas (Kenneth), and Dorisell Thomas; one brother Earlie "Pimp Juice" Thomas Jr.; one sister in law, Gladys Perry; one brother in law, William Avery Perry; seventeen grandchildren; twenty-two great grandchildren. A very special thank you to his team of caregivers, Debra Jones and family.

Herman Thomas affectionately known as "Cooley" to family and friends was born on October 6, 1931 in Franklin County, NC to the late Earley Thomas and Mittie Alston Thomas. He departed this life on Friday, October 25, 2019 after a brief illness. Herman... View Obituary & Service Information

The family of Herman Thomas created this Life Tributes page to make it easy to share your memories.

Herman Thomas affectionately known as &quot;Cooley&quot; to family and...

Send flowers to the Thomas family.