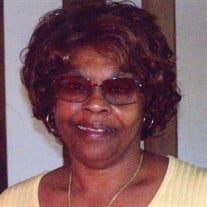 Geraldine Mickle was a lively and engaging person who enjoyed many things. Born on October 12, 1939, Geraldine was a force to be reckoned with. She loved to laugh and enjoy everyone around her. All her friends loved her. Born in Halifax, North Carolina she moved to Baltimore as a little girl. She attended schools here and was a graduate of Edmondson High School. Geraldine met Edward Mickle when they were students at Edmondson High and he knew she was the one. It was one snowy day, he dug his way to her house which was five doors away, and their courtship began. They were married and have been together for sixty-three years. Geraldine loved sports cars and could drive a stick shift. Her husband, Edward, taught her how to drive in a 1941 Chevy and Geraldine drove the car into the side of their house, when they lived in New Mexico, and all they saw was the refrigerator coming toward them! She liked to drive fast! She was known for her fried chicken and pig feet; they were her specialty. Geraldine loved electronic devices. She usually had the latest cell phone, computer, or tablet. She really loved Doberman Pinchers. The first Doberman she purchased was from a Spiegel Catalog! An avid Ravens fan, she named one of her Doberman’s Raven. Geraldine just received a new Doberman Pincher, she named Leo, three days before her death. Geraldine worked several places over the years; the old Read’s Drugstore at the soda fountain, London Fog, the Post Office, and a credit card company; she also had her own company in West Baltimore. Geraldine worked at March Funeral Homes for twenty-two years and was known by everyone. You did not want to be late with information she was looking for or needed to complete her tasks. You would hear from her! She not only was known by everyone but loved as well at March Funeral Homes for her infectious laughter, great personality, the ability to give you a nickname, and her strong work ethic. Geraldine did not want to be known as old because of her age. She was young in heart and mind. Geraldine leaves to cherish her memory, husband Edward. Preceding her in death, two sons Larry K. Mickle and Edward Mickle, Jr. A host of grandsons, granddaughters and great-grandchildren, family members, numerous extended family, and friends.

Geraldine Mickle was a lively and engaging person who enjoyed many things. Born on October 12, 1939, Geraldine was a force to be reckoned with. She loved to laugh and enjoy everyone around her. All her friends loved her. Born in Halifax, North... View Obituary & Service Information

The family of Mrs. Geraldine Mickle created this Life Tributes page to make it easy to share your memories.

Geraldine Mickle was a lively and engaging person who enjoyed...

Send flowers to the Mickle family.