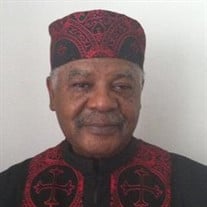 Ernest Clifton Holmes, Supreme Prince was born in Philadelphia PA, on October 17, 1942 to the proud parents of the late Emma Boggs Holmes and Sidney Shannon. He was educated in the Philadelphia Public School system. He served in United States Army as a Medic in Germany for several years. Upon leaving the Army he obtain his CDL, which he felt was not his profession. He was hired by the City of Philadelphia as a Policeman where he worked in Philadelphia highest crime community for 18 years. In June 1979, he graduated from Antioch University’s Pennsylvania Branch with a Bachelor of Art Degree in Human Services. Ernest spent the majority of his professional life in Law Enforcement, working for the State of Pennsylvania as a Probation Officer until his early retirement. He completed several courses as a herbalist, where he learned to make his famous garlic cough syrup, which you could smell his clients a mile away. Ernie loved to cook following in his Father’s footsteps, who was a Chef by profession. You could always find him in the kitchen creating new dishes, making pies/cakes, and his famous soups which will be missed. He often spoke of having a food truck and traveling around Philadelphia serving various communities. In addition to his love for cooking, he loved music especially Jazz and Anita Baker. You would always find him on the dance floor dancing with all the ladies. He was great Father, when Princess De Four traveled for her jobs, he would weekly care for Shannon, Clifton and other close relatives and friends children. He joined the Universal Hagar’s Spiritual Church in New York City under Prince Alfred Bailey in 1973. We are taught that death never surprises a person they always know. The following information was written by Prince Holmes a couple months before his transition: “Wisemen Board Member, Prince of the State of Pennsylvania and Supreme Prince of the UHSCA. Although living in Philadelphia he joined the Association at New York State Headquarter in 1973, where Prince Alfred Bailey presided. He attend all services and was faithful. He became a Deacon and soon accepted the responsibilities as Chairman of the Deacon Board. In 1980, he transferred to the Philadelphia Church and was appointed Church Father as well as Chairman of the Deacon Board by Rev. Katie Britton. Eventually, he served as Acting Pastor before his appointment as Pastor following the tenure of Rev. Britton. He served in that capacity for 21 years. He was the Exalted Knight of the Knight of All Seeing Eye in the local chapter and has been appointed to the Royal Chapter. He had the honor of being appointed the first President of the Men’s Convention that he served for 11 years, before resigning to allow other men to serve and express themselves. He served as Supreme Prince, an office that had not been filled for 51 years, since the passing of Prince Thomas Surbadger, the original Supreme Prince.” He was a true Hagar and believed in serving God in Spirit and in Truth. Many of us have felt his magnetic spirit when anointing or blessing the people. He most recently stated “ It is so important for the People to be blessed”. He was truly a lecturer and outstanding teacher. He was the originator of the Supreme Men’s Convention in April. Prince Holmes was the original members of the publishing of the first UHSCA Minister’s Manuel. During the Pandemic on the prayer line, everyone looked forward to him teaching our Doctrine. This lead to him forming the Ethiopian Study Group with Mother Patricia Darrah of Philadelphia. He was a visionary. He often supported the ideas of his members. He encouraged us to demonstrate this Truth as well as live it. His greatest spiritual gift was healing. He was never boastful of his power or position. He was quite the opposite. Ernie was the silent storm until you ruffled his feathers. He had a way of making the young men feel comfortable talking to him. At Conventions in his room you would find them gathered around him talking about this Doctrine . He did not believe in any Big I(s) or Little U(s). From the Union with Joyce Holmes came the late Ernest Clifton Holmes Jr. and Strawn Holmes, In 1973 he united in marriage to Rachel Smith De Four, from this union came the late Shannon Louise Holmes and Professional Clifton Smith Holmes. Preceded in death by his parents, Grandparents Lloyd and Estella Boggs, Aunts, Madge Pearl Gardner, Bernice Christian, Estella Toddler, son Ernest C. Holmes Jr, brother Melvin Holmes (Jane). Cherishing his memories are his sons, Professor Clifton Smith Holmes (Deja) and Strawn Holmes (Dutta), sister Gloria Braxton. grandchildren, Mi Joi Holmes, Makda Holmes, Maya Holmes, Brother Clifton Smith Holmes II, Mekhal Holmes, Melchezedek Holmes, Mansa-Mekonnen Holmes, Joyce Holmes, Princess Rachel De Four, Mme. Bettye Sheppard (Special Friend). Nieces, Cheryl BraxtonPindell, Bernadette Braxton Sample, Darlene Richardson, Melvette Holmes, greatnephews, Brennan Braxton and Keith Holmes; great-nieces Dashnay Mayo and LaMeesha Richardson, Host of Relatives and Friends.

Ernest Clifton Holmes, Supreme Prince was born in Philadelphia PA, on October 17, 1942 to the proud parents of the late Emma Boggs Holmes and Sidney Shannon. He was educated in the Philadelphia Public School system. He served in United States Army... View Obituary & Service Information

The family of Ernest Holmes created this Life Tributes page to make it easy to share your memories.

Send flowers to the Holmes family.